Fayetteville is the sixth largest city in North Carolina. It has a population of 209, 889 people as of 2017. The mayor of Fayetteville metro is Mitch Colvin. The area where Fayetteville is located today was historically inhabited by a Native American people called the Siouan.

Fayetteville was formed in 1783 after Cross Creek and Campbellton united. These were the two ares that had settlements after the chaotic disturbances of Yamasee and Tuscarora Wars in the 18th century.
It is the Scots who established the towns of Cross Creek and Campbellton. The town of Fayetteville itself was established in honor of Gilbert du Motier-Marquis de Lafayette. He was a French military man and a hero whose aid during the war greatly helped the American forces.

Fayetteville NC is the first American city to be named in honor of Lafayette. He paid a visit to the city on March 4 and 5, 1825, when he toured the United States. 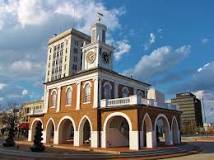 Fayetteville city is the county seat of Cumberland County, North Carolina. It is called the home of Fort Bragg. The city itself contributes around $4.5 billion per year to the county’s economy and is regions retail hub. The metropolitan area is Fayetteville and suburban the areas are Hope Mills, Fort Bragg, Spring Lake, Raeford, Rockfish, Pope Field, Eastover, and Stedman.
Fayetteville is a wonderful city and there are amazing things you can see when you visit. There are museums, local festivals, art and culture events and much more.

The Arts Council of Fayetteville building is the location of many cultural and art events. Art flourishes in Fayetteville because of a supportive and friendly community. The building is a visitor’s hub. It features artists both local and regional. It regularly hosts free community art events.
Live theatre productions are done at the Cape Fear Regional Theater. The parachute jump located at Fort Bragg at Patriots Field is also a place of interest for many Fayetteville visitors.

The city is a perfect destination for visitors interested in agri-tourism. An example is the Cape Fear Botanical Garden.

There are many driving trails that feature a lot of different things that would interest visitors in Fayetteville. Here are two examples of the many trails available that are perfect for history and vacation. The African-American Heritage Trail – This one consists of sites with a history of the African-Americans in Fayetteville and Cumberland County. They preserve history about slavery, the free blacks trade, religion, and education. The All-American Adventure Trail – This adventure trail is perfect for nature lovers. Enjoy an American Adventure while fishing and bird watching.
Fayetteville has many parks and trails with picnic activities like climbing and skating.

Fayetteville is a city rich in history and culture. It has all the things that a new visitor would want to experience in a city. Amazing cultural and art events, entertainment hubs, memorial parks, and many driving trails See more